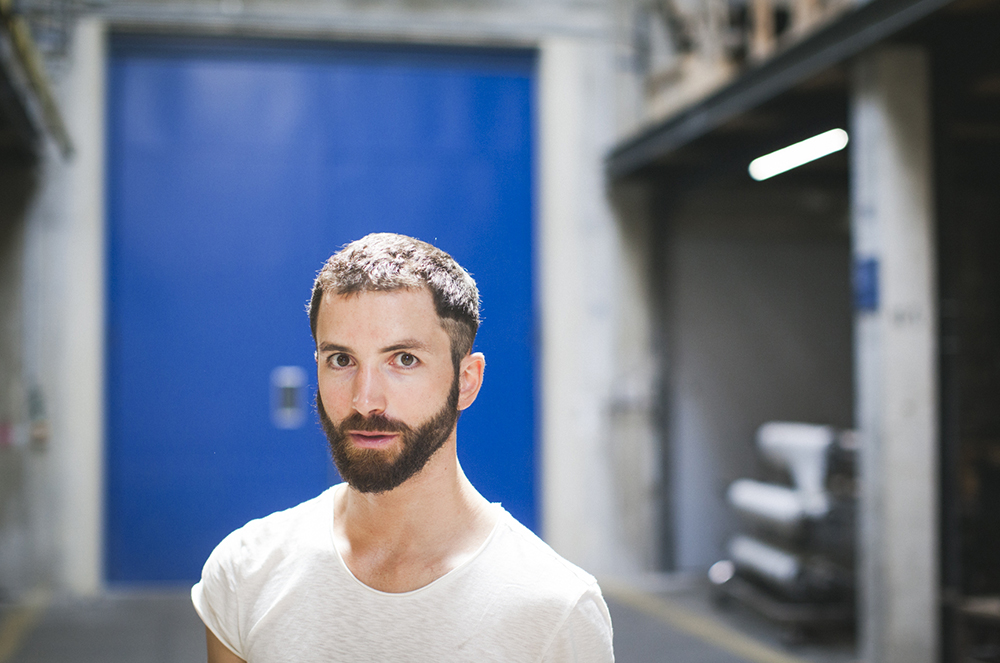 Meeting with the Austrian choreographer and dancer Simon Mayer at the Odeon theatre – Vienna, where his 2014 performance Sons of Sissy was scheduled on July 20th, 21st and 22nd, during ImPulsTanz – Vienna International Dance Festival. Together with Matteo Haitzmann, Patrick Redl and Manuel Wagner, Simon Mayer tracks back traditional Austrian dance (Schuhplattler), singing (Jodeln) and instrumentation in a fascinating and unconventional ritual.

Did you adapt any aspect of Sons of Sissy for the large stage of the Odeon theatre where it has been played during ImPulsTanz – Vienna International Dance Festival 2016?

At the Odeon, the space really helps us. We wanted to be sure that the public can hear the music well enough. We were thinking whether to amplify the music or not because the basic idea of the piece is to not amplify the sound. It is acoustic for the reason that I wanted to go back to traditional instruments, to farmer living rooms; they were no amplification, just the pure instruments played acoustically. It’s an acoustic piece. So we want to keep this idea as much as we can, even in a big space like the one of the Odeon. Normally, I choose to have the space open.

More generally speaking, has Sons of Sissy evolved since 2014, the year of its production?

We’ve changed the end. There was no sound in the end when we did the premiere of the piece. We were just standing together. One of the great opportunities to play a piece several times is that you really find a certain energy that you want to represent, a certain atmosphere that can only be found by repetition and by going in it deeper; especially when you have the aspect of ritual inside the performance. These traditions are linked to the past, to past luggage and habits that we want to liberate ourselves from. It’s good but not easy to do a ritual in front of an audience. On one hand you can say that theatre itself is a ritual but on the other hand, if you want to put something on stage to make a ritual, you need time to get into it, into the mood. After having done the performance 20 times you’re slowly getting there. The conditions are good enough: you can let go. Most of the rituals need this moment of letting go.

With your three companions (Matteo Haitzmann, Patric Redl, Manuel Wagner), you’re singing and playing different traditional songs before and during dancing. You use traditional formation with two violins, a contrabass and an accordion…

We begin Sons of Sissy by playing three songs which are always played today in Austria. They are not popular in the whole of Austria but some people can recognize them. There are three parts in which we use traditional songs (there is this difference between traditional songs and folk songs; folk song, in English, is more the pop version of traditional song). When we are standing naked in front of the stage, you cannot understand what we sing because it’s a fantasy language. We mixed different dialects from around here and did our own. The last song is also a traditional song. Everything that is in between is music we developed during the process. I was very interested in extracting the ritual from the traditional dance and music. To find back the ritual in it, find back the healing qualities, they got lost a bit during their uses. What I’m trying to do is to bring them back even more. For example, there is this song in which the bass is playing (Simon Mayer sings the rhythm of the bass part), the other instruments (Simon Mayer sings the melody of the other parts). At the end rests the basic layer. The basic layer was always there. If you take all the instruments away and you keep the bass, there is the background, this music layer which is very close to other traditional background. Regarding dance, for example, schuhplattler has similarities to gumboot dance from Zimbabwe.

Do you practices traditional dances since a long time? How did you adapt them for Sons of Sissy?

Matteo Haitzmann and I, we have been doing traditional dance since we are children. Patrick Redl and Manuel Wagner learned it for Song of Sissy. For the gesture, we adapt it because these dances are couple dances danced by men and women and we are always four men. We dance in couples or alone. We have partners of the same sex. We changed the gender roles for the performance. Then we also do couple dances with invisible partners. In the choreography, you get this part where there is normally someone behind you but the partner is not there because we are just four people. Most of these dances are still done by a whole group of people and that’s another kind of adaptation. We were finding how to show a group dance, dance in couples just with four people.

On stage, there is a bench, bells on a harness. The lights are low most of the time. There is no background. Could you tell me more about the sobriety of the scenography?

There are few essential things. For me it’s always important that there is a relation between materials, textures and here, there is a lot of wood and metals and it’s important that these elements fit together, that they keep a certain atmosphere. The other reason why there aren’t so many props is because it’s easier to travel. If you can take all your props in only one or two suitcases it’s easy to travel and it’s also ecologic (laugh).

And you use some of the props, as the whip, to engage the audience…

The loud noise of the whip is traditionally used to chase away the bad spirits. When the winter is nearly finished and the spring is coming with those whips you smashed away, you tell all the winter spirits to leave. It’s used in the piece to chase away some parts of the heritage. It’s a way to liberate our body, our head from these conservative, narrow, nationalistic practices. When I scream, it is more a scream of the inside. I address the audience “Look there is a way to liberate yourself!”, “Look, that’s how you can do it!”

There is also in Sons of Sissy this reflection about the exhaustion, the fatigue due to the intensity and the duration of the performances. The transitions between the sequences often insist on the respiration, the relaxing breaks…

The costumes in the first part are not traditional costumes. There are some elements of the traditional costumes, in the texture, the colours and the symbols for example. All the costumes are made for the performance, like mine with the pink stripes. There is this idea of being really neutral with the material that we use but then of course, nudity is not really neutral. It’s like another costume. The nudity is also there because of this topic of ritual. There are some rituals that are done naked, some initiations. It makes it more an act of liberation, taking off the cloth. There is this German world, “selbstverständlich”, something like “it’s normal”, as it is normal to be naked and to play our instrument, as it is normal to be naked and to sing together and stand together, like it is normal to do this dance with two men. This is a very important task in terms of the expression, in terms of the activity we do on stage, to show some kind of solution by acting like it’s normal. We do this as if it was a tradition. I was also looking how to be as far away as possible from a traditional costume and the nudity was the furthest way that I could imagine because nobody will stand in a traditional dance evening on stage naked. The nudity is the furthest way from the conservatism.

The title, Sons of Sissy, is a reference to the Empress Elisabeth of Austria but it is also a term used to describe a soft man; a man who’s out of the norm…

There are a lot of national songs, as the one of Austria (“Home to great daughters and sons”) with the reference to the sons. The name sounds also like a band name, a name of a music group, and fit very well to what we do on stage. Originally we were a traditional (music) band which we transformed into something else.

Through the nudity and the solo, duo and four partners parts, there is also something like a claim with regard to questions of complicity between men and eroticism (the proximity of the bodies, the transpiration, etc).

I’m curious to know which kind of feedback you had since you perform Sons of Sissy.

When we played the premiere in Vienna, there were some people coming from the traditional dance group, from my hometown. They were very enthusiastic about Sons of Sissy. They were very happy when they recognized some traditional dances that we use and it also opened their mind about what you can do with them. Others were a little bit confused. But the reaction was good. It could be amazing to have the chance to perform in front of a very conservative audience – with traditional dancers and musician – to see what it does to them. I think that we will have this opportunity at the end of July. I played the previous solo SunBengSitting in the countryside. It was really nice to hear the reaction of people. A lot of times they react about the nudity. People get so stuck on the nudity. They don’t see anything else anymore. A lot of people asked me why I was working with naked bodies on stage, “it’s not interesting anymore, it’s not shocking anymore” but it’s not true, it’s very shocking. There are a lot of very shocked and confused people, even in the cities. And as long as people are shocked about nudity we’ll keep on performing naked : ) But in a sharing and sensitive way, not only to provoke.